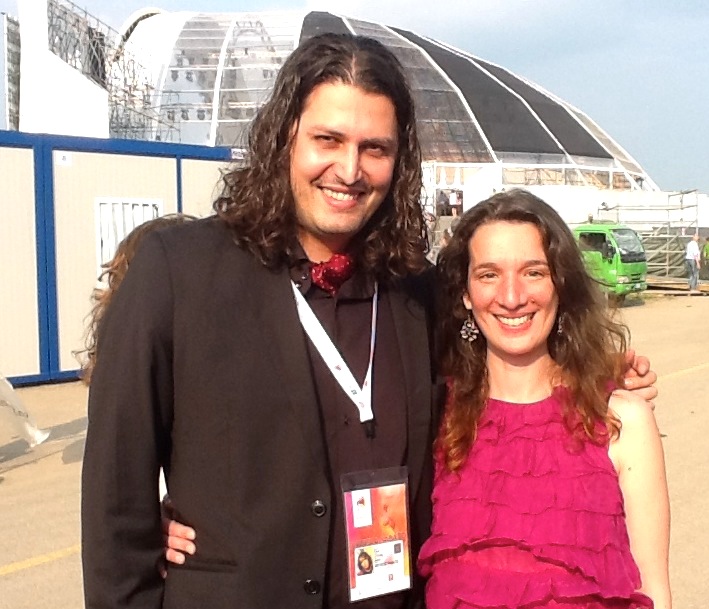 On several occasions, Marco Lo Russo aka Rouge from 2011 to today has had the honor to perform as accordionist and contemporary composer in world vision for personalities like Pope Fransceco and Pope Benedict in very prestigious events and widespread on major national and international media as the Teletext. We have collected some videos of these events broadcast by RAI television and TV2000.
The National Eucharistic Congress of September 10, 2011 from Ancona, Italy in the presence of Pope Benedict XVI, Marco Lo Russo aka Rouge performs as a soloist with the orchestra, with his compositions from disc Modern Accordion and with italian actress Lina Sastri.

In the world meeting Jubil Family for the families One world family love 2012 held the north of Bresso Park, Milan, Italy in the presence of Pope Benedict XVI with about a million people, broadcast by RAI, TV2000 and with the participation of numerous artists: Mario Biondi, Ron, Serena Autieri, (on the photo Dulce Pontes with Marco Lo Russo) and many others, Marco Lo Russo aka Rouge performs like soloist and with actress Pamela Villoresi.

At Easter 2013 Marco Lo Russo performs during the Exposition of the Holy Shroud from Turin Cathedral, Italy where Pope Francis spoke with a video message.

On the occasion of Pope Francis coming back from Brazil for World Youth Day 2013 WYD, Marco Lo Russo aka Rouge is host of TV2000 and has the honor to perform his composition Flamentango, from the CD Modern Accordion to follow the live return the pontiff.

Concerto for solo accordion September 27, 2013 in Cagliari, Sardinia Marco Lo Russo aka Rouge, introduced by the poet Rossana Abis, for the concert season in honor of Pope Francis. The season was organized by the Conservatory of Music G. P. da Palestrina of Cagliari.