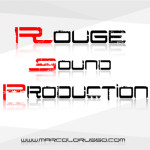 The recording studio of the label Rouge Sound Production, over the years, has produced and collaborated in the realization of various musical and artistic productions. Diversified and endowed with their originality, which nevertheless conforms to the requirements of the international music record market standards, the musical productions of Rouge Sound Production reflect the artistic curiosity of Marco Lo Russo aka Rouge like producer. With the collaboration of sound engineers, DJs and the pianist, keyboardist and arranger Giulio Vinci, the Rouge Sound Production has produced and produced a conspicuous discography and numerous musical productions also for the Cinema, TV and Theater. He has also collaborated with various music productions for the Sanremo Festival and has produced songs classified finalist at Eurovision Song Contest 2017 like the EP 7 Days.